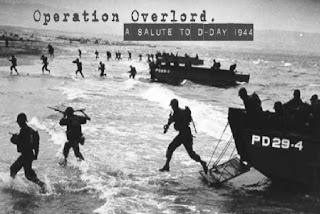 Object:
1. The object of operation ‘OVERLORD’ is to secure a lodgment area in the Continent from which further offensive operations can be developed. The lodgment area must contain sufficient port facilities to maintain a force of some twenty-six to thirty divisions, and enable that force to be augmented by follow-up shipments from the UNITED STATES and elsewhere of additional divisions and supporting units at the rate of three to five divisions per month.
2. The operation will be carried out in two phases:-
Phase I: The effecting of an assault landing on the NORMANDY beaches between the limits of QUIENNEVILLE in the WEST and CABOURG-LES-BAINS in the EAST, to be followed by the early capture and development of airfield sites and the capture of the port of CHERBOURG.
Phase II: The enlargement of the area captured in Phase I so as to secure the whole of the CHERBOURG, LOIRE and BRITTANY group of ports.
Execution (Workout):
Phase I:
Objective 1: Capture the NORMAN beaches
- Drop-Run-Drop 10x lengths of basketball court (lie prone behind baseline, get up, run to far baseline, drop, repeat 9 more times)
Objective 2: Move inland (SOUTH) and secure causeways
- Run 2x modified gym-loops (out 2nd floor gym, up stairway to heaven to 4th floor, run hallway to far stairs back down to 2nd floor. On second loop enter Hayes gym where you start the IOCT)
Objective 3: Navigate the BOCAGE patchwork to remove GERMAN emplacements
- Run 1x IOCT
Objective 4: Link up with 101st ABN DIV troopers in CARENTAN
- Burpee Broad Jumps the length of 3rd floor N->S hallway *(upon completion, run to 4th floor hallway for the fireman’s carry and buddy squats)

-Entire workout will be run with a buddy, staying within an arms length of him/her at all times.
-If there is a wait time on any IOCT event, the team does burpees until it’s their turn.
-Lost? Don’t worry, a detailed concept brief will be given in the morning…
Posted by Black and Gold CrossFit
Email ThisBlogThis!Share to TwitterShare to FacebookShare to Pinterest

We started at the forwards IOCT to avoid the crowds.
Also, the form on my buddy squats wasn't great, mostly because he has about 65# on me.

Good smoker this morning... I thought I was going to hack up a lung.

Paul P. and I finished right at 20 minutes. I held him back on the gym loops. Good workout, the burpee broad jumps were a new suck.

Come out to Sandhurst and get your Black and Gold CrossFit shirts. They will be $20 and all proceeds go to getting us more equipment in the new room.

Thueneman and I
18:05 (I forgot to start my watch until the second length of the b-ball court)

MAJ Mayo and I mission complete at around 18:26
Good Mission Tex! Burpee jumps were a welcome addition.

I forgot to start my watch on this one, but I think my partner and I finished around 21 mins.

Tex - great job on the workout.

I can't wait to get my new Black and Gold t-shirt this weekend.

We'll be setting up a stand and selling them tomorrow during Sandhurst and we'll need a little help organizing and running it. If you're interested, shoot me an email (daniel.hogan@usma.edu) and i'll give you some info on link up times and what not. Any help is greatly appriciated.

Thanks for all of the compliments, but to be fair, this workout would not have been the same without all of the help that B&G CF and NM gave me. I really learned a lot just from planning this workout.

I am really excited for my new Black and Gold t-shirt too!

So im not a Member of B@G Crossfit but I do crossfit off of Crossfit Omaha. I am also in the Army and would love to get a couple of your shirts. One for myself and one for my bro that does crossfit while being deployed in Afghanistan. Is there any way I could get my hands on them?

Armyfirefighter--Yes you can get one. The website isn't showing them yet but I put them in the store. Shoot them an email at coalitionpress@gmail.com and tell them you would like one of the new B&G CrossFit shirts and ask them to update their website. That would help us both. If that doesn't work get back with me in a couple of days and we'll work something out.

Did yesterday's workout today. Bench press really is one of my goats, and pull-ups were really tough as well. I started off with my BW of 165, but was only able to do 2 before I downgraded to 155 (2 reps). I went down to 145 and was able to complete 8 the third set and 4 the fourth. For the final one, I finished up with 5 reps at 135. I did 71 pullups. Definitely both an area I need to work on heavily, but a huge improvement over where I started in December.

SUBSCRIBE TO GET YOUR DAILY WORKOUT SENT TO YOUR EMAIL